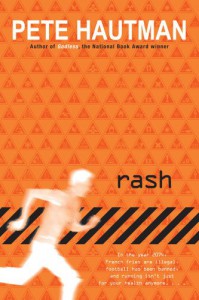 Picture, if you will, life in the year 2076. You are living in The United Safer States of America and things such as obesity, verbal abuse, and dangerous activities are against the law. The legal driving age is twenty-six. Even sports such as football are illegal. Sports that are allowed are hindered due to all the safety gear the participants are required to wear. This is the world that sixteen-year-old Bo Marsten inhabits.

Bo has inherited a bit of a temper from his father who has been in prison since 2073 for road rage. He has been in trouble at school many times for "failing to control his antisocial impulses," but when he is falsely accused of causing a rash that spreads throughout the school, his anger gets the best of him and he assaults a classmate. This action lands him in a work camp in the middle of the Canadian tundra that is surrounded by hungry polar bears.

The work camp Bo is sent to is a factory that makes pizzas. He becomes a member of a four man team with the responsibility of using the pepperoni gun. Each pull of the trigger on the pepperoni gun delivers twenty-six pepperoni on each pizza. When the team works in sync, life isn't so bad. There is only one group that causes Bo problems while he is there, the Goldshirts. The Goldshirts are an elite group at the pizza factory that have special privileges like a variety of food, when the others only have defective pizzas to eat for every meal, every day. The Goldshirts main job is to play football for the warden.

All new editions to the work camp eventually have a tryout in front of the warden. This entails running and catching a pass. If you catch it, you become a Goldshirt and are placed on the team. Bo makes the team and experiences physical activity without protective gear for the first time in his life. The warden requires that the team practice every day for several hours in order to prepare for an illegal game with another work camp. If you want to remain a Goldshirt, you play even if you are injured.

After surviving work camp and brutal football games, Bo, with the help of an unlikely attorney, is released from his sentence and allowed to go home. Bo begins to think about life in the USSA and considers where else he can go that would allow more freedom.

Pete Hautman has written a unique sports novel for the sci-fi/fantasy lover. This interesting look at what might happen to a society more concerned with safety than freedom is a page-turner. The reader will enjoy comparing today's life with the life Hautman has created.
Humor Jokes & Riddles Mystery & Detective Stories Science Fiction Fantasy & Magic Football Fiction Fantasy Science Fiction